I woke up this morning after some nightmares about tarantulas (I wish I was joking) and just felt really good to be here. I have 19 more days in Aquiares, less than three weeks. So I was feeling really grateful about this place, especially because I have been informed that it’s already snowed in Ithaca. So I got up thinking about how sweet it is to wake up with sunlight and go eat pinto for breakfast, filling my plate in a kitchen that smelled like pineapple because there’s a pineapple there on the counter, cut open like a patient on the table in the operating room. And how good it is to hear these particular sounds of different birds, and chickens running around in the backyard, and the Loras, and the washing machine that sounds different from the ones in the States. How good it is to wake up knowing that I’ll be working outside in a bit, under a sun that just won’t stop reminding you that it’s there. My legs feel used because I spent yesterday playing basketball and soccer and doing yoga after working in the morning. I am stirring sugar into my coffee at a table with plates left on it, set for a family. My host brother sang Phil Collins in Spanish in the bathroom this morning as I blinked my eyes back to life and brushed the hair back from my face.

On another note, the experts are saying that Volcán Turrialba is going to erupt. It was spewing smoke and ash, and luckily none of that fell here because the mountain’s wind blew it in the other direction. Everyone thought the volcano had calmed down again, but apparently it’s only a matter of time until it erupts for real. This is a main story on the news every night, and commercials about saving water. The volcano is less than 20 km away, and so we see helicopters flying overhead to go and monitor it every day. There’s nothing really to do except watch and wait, and hope for the best.

In the meantime, we have harvested celery for the first time from the garden! This is fun to harvest because it smells great. A lot of people here like celery, as well as radishes, which surprised me. But vegetable preferences are different because the veggies are used differently. When we eat salad, it can be cabbage and cucumber and carrot soaked in ketchup and mayonnaise (this sounds gross but it’s not), or it could be lettuce with radish and tomato drizzled with lemon juice and a bit of salt. Green beans go to picadillo instead of being eaten raw, ever, or used as a side dish. Whenever anyone sees basil in the garden they can’t resist telling us that it’s great for earaches (mix with oil and put it in your ear to relieve pain), but pesto isn’t a thing. I like these foods, and learning different ways to use my favorite vegetables. Also, it doesn’t matter how you enjoy your lettuce; if you worked to grow it, the satisfaction is the same 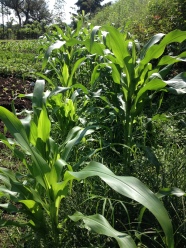 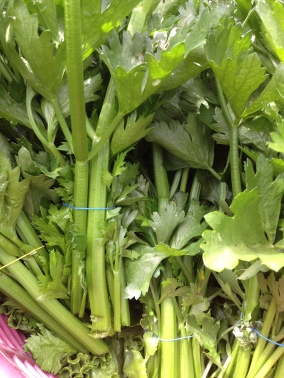 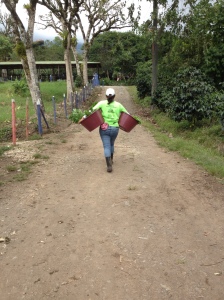